Richard John Neuhaus: A Life in the Public Square, by Randy Boyagoda. 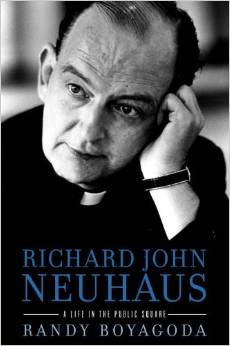 Richard John Neuhaus: A Life in the Public Square


Richard John Neuhaus (1936-2009) was one of the most influential figures in American public life from the Civil Rights era to the War on Terror. His writing, activism, and connections to people of power in religion, politics, and culture secured a place for himself and his ideas at the center of recent American history. William F. Buckley, Jr. and John Kenneth Galbraith are comparable -- willing controversialists and prodigious writers adept at cultivating or castigating the powerful, while advancing lively arguments for the virtues and vices of the ongoing American experiment. But unlike Buckley and Galbraith, who have always been identified with singular political positions on the right and left, respectively, Neuhaus' life and ideas placed him at the vanguard of events and debates across the political and cultural spectrum. For instance, alongside Abraham Heschel and Daniel Berrigan, Neuhaus co-founded Clergy Concerned About Vietnam, in 1965. Forty years later, Neuhaus was the subject of a New York Review of Books article by Garry Wills, which cast him as a Rasputin of the far right, exerting dangerous influence in both the Vatican and the Bush White House. This book looks to examine Neuhaus's multi-faceted life and reveal to the public what made him tick and why.
"Boyagoda dispassionately describes this fascinating and active life, and he manages to blend skills as a folksy storyteller, researcher and unbiased historian, providing a biography that is balanced, interesting and relevant. A useful, provocative spotlight on one of the leading lights of the 20th century." – Kirkus
“Faith, it is correctly observed, while intensely personal, is never private. In North America, nobody recently has more effectively defended and encouraged bringing religion into the public square than Richard John Neuhaus. And up until now, no one has offered a more credible, careful, and colorful biography of this convert to Catholicism—in the line of Orestes Brownson, Isaac Hecker and Thomas Merton—than Randy Boyagoda.” – Cardinal Timothy M. Dolan, Archbishop of New York, author of True Freedom
"A Lutheran pastor who became a Catholic priest, labeled sometimes as liberal and other times as conservative, Neuhaus was truly a "sign of contradiction" in our times, a man whose constant affiliation in life was of belonging to God and striving to draw ever nearer to Him. Thorough, vivid, and keenly understanding of the interplay of personality, faith, and cultural context, Boyagoda's biography of Neuhaus does justice to this man of faith who became a type of "grace to be reckoned with," becoming a culture-altering tour de force. As Americans continue to explore the challenge of living one's faith in the public square, this book is an enriching testament to a man who blazed that trail in his own lifetime, fearless of everything but God Himself." – Carl A. Anderson, Supreme Knight, Knights of Columbus 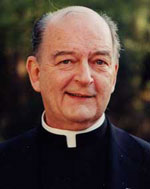 Fr. Richard John Neuhaus slipped away today, January 8, shortly before 10 o’clock, at the age of seventy-two. He never recovered from the weakness that sent him to the hospital the day after Christmas, caused by a series of side effects from the cancer he was suffering. He lost consciousness Tuesday evening after a collapse in his heart rate, and the next day, in the company of friends, he died.

My tears are not for him—for he knew, all his life, that his Redeemer lives, and he has now been gathered by the Lord in whom he trusted.

I weep, rather for all the rest of us. As a priest, as a writer, as a public leader in so many struggles, and as a friend, no one can take his place. The fabric of life has been torn by his death, and it will not be repaired, for those of us who knew him, until that time when everything is mended and all our tears are wiped away.

A Christian wake service in the form of a Vigil for the Deceased was celebrated at the Church of the Immaculate Conception on Monday evening, January 12.

In lieu of flowers, donations are requested for Fr. Neuhaus’ work, the Institute on Religion and Public Life, online at this page or by mail to:

“When I come before the judgment throne, I will plead the promise of God in the shed blood of Jesus Christ. I will not plead any work that I have done, although I will thank God that he has enabled me to do some good. I will plead no merits other than the merits of Christ, knowing that the merits of Mary and the saints are all from him; and for their company, their example, and their prayers throughout my earthly life I will give everlasting thanks. I will not plead that I had faith, for sometimes I was unsure of my faith, and in any event that would be to turn faith into a meritorious work of my won. I will not plead that I held the correct understanding of “justification by faith alone,” although I will thank God that he led me to know ever more fully the great truth that much misunderstood formulation was intended to protect. Whatever little growth in holiness I have experienced, whatever strength I have received from the company of the saints, whatever understanding I have attained of God and his ways - these and all other gifts received I will bring gratefully to the throne. But in seeking entry to that heavenly kingdom, I will…look to Christ and Christ alone.”

The story of the modern social conservative movement is all about activism and politics, petitions and court cases, but Father Neuhaus’s great testament was about something grander: through those he inspired, through his writings, through his organizing, and through something as simple as connecting people over lunch who may share nothing in terms of what they can eat on the table but share greatly in what is unseen, Father Neuhaus fundamentally changed religious life in America forever.

This is not an exaggeration. Nor by any means is it a dismissal of anyone else’s influence - but ultimately, the changes most other conservative thought leaders have helped achieve in the twentieth century were made at the hands of other men, elected to office. Father Neuhaus did not merely inspire the intellectual undergirding of change: with God’s help, he fashioned it himself, through hard work, a gift for eloquence, and always a wry smile at the end.

The world Father Neuhaus leaves is one where evangelicals and Catholics are more united than they are divided - where the old ethnic politics and arguments have faded, and where we worship and work together in harmony. My mother, never anything but a Protestant, upon learning of this Catholic convert priest’s passing, wrote to say she paused on learning the news to sing Faure’s Pie Jesu for him. I can think of nothing more fitting.

His conviction that abortion was the great crime of the age and his disgust with the American system’s failure to expunge the crime led to the most controversial act of his editorship, the publication of a symposium entitled “The End of Democracy?” in which he and other participants flirted with the notion that the United States had lost its legitimacy. COMMENTARY’s editors responded in part with a symposium entitled “On the Future of Conservatism,” in which various contributors argued heatedly against what they perceived to be an unacceptable radicalization of conservative discourse.

The breach was never fully healed, and yet, through it all, there was Richard, a man of great personal good cheer and bonhomie, always in possession of a terrific piece of gossip he always knew exactly when and how to drop in order to cause the biggest commotion, who somehow found the time to crank out thousands of words a month while jetting back and forth from Rome, engaging in plots and subplots and side bets. He was an exemplar of the truism that a righteous man need not be or conduct himself as though he were holier-than-thou. But in the end, his work was his life, and whether he was ministering to fatherless youths in Brooklyn or offering his considered and always highly informed opinion on the matter of stem-cell research, Richard John Neuhaus did what he did and said what he said for the betterment of humankind and for the greater glory of God.

(More tributes are being collected by Steve Dillard @ Southern Appeal)

Many can claim the experience of reading each month's issue "back to front," beginning with "The Public Square," -- Fr. Neuhaus' insightful, clever (and sometimes a tad snarky) commentary on matters literary, political, and theological. Fr. Neuhaus would ultimately take up blogging at First Things' aptly titled "On The Square. On occasion, however, he would also contribute regular articles to the journal he founded.
Fr. Richard J. Neuhaus on the Sexual Abuse Scandal within the Catholic Church